Meet Danny G – His Success is a Very “Good Thing” 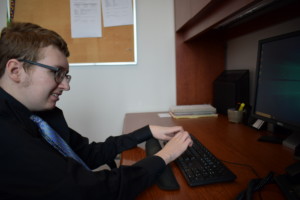 (Palm Beach County, FL) – Sometimes in life, you know a good thing when you’ve got it, and you’ll go the distance to hold onto it.  Danny Goldstein of Boca Raton was that special “good thing” for the Center for Autism and Related Disabilities (CARD) at Florida Atlantic University.

Danny had searched for more than a year for the perfect job. He had a newly minted degree from Palm Beach State College in hand, and he knew exactly what he wanted to do but there were a few barriers in his way.

“Danny is a very smart, positive, quiet guy with a great sense of humor who just happens to have an autism diagnosis,” says Karine Shashoua, Career Resource Specialist with Work Opportunities Unlimited/Independence Works.  “Danny has mobility issues and uses a wheelchair but he’s also a motivated young man who is skilled in all things computer. Danny really wanted to work; it’s my job to make that happen.”

As a Career Resource Specialist, Shashoua dedicates her days to breaking down barriers to employment for people with disabilities. She helps prepare people for the workplace and supports them on the job. “We operate from the premise that people with disabilities deserve to work independently in their communities, just like everybody else.”

“My degree is in computer programming,” says Danny Goldstein. “One of my frustrations was actually trying to find a job that suited me, and a job that interests me. I worried about having to lift heavy objects or standing for a long period of time.”

“We weren’t having much luck with job development for Danny,” says Shashoua. “In addition to his physical challenges, he had been unemployed for a long time. He used to be a referee for city basketball games but needed to update and add more to his resume, so we looked for an intern position for him; a little On the Job Training or OJT.”

Funded by the Division of Vocational Rehabilitation, Florida Department of Education, On-the-Job Training is an opportunity for an individual to demonstrate their skills and gain experience, and an opportunity for an employer to mentor a person with a disability. “Typically, it’s a time limited position but it does allow the trainee and employer to see if there is potential for a job,” says Shashoua. “Danny’s parents are really involved and through their own networking they put me in touch with the CARD program. I reached out, Danny interviewed, and they offered him an OJT opportunity. We knew they had tight funding and hiring Danny was out of the question, but he needed the experience, so we jumped at the chance.”

The Center for Autism and Related Disabilities (CARD) is a community-based organization that assists and supports over 5-thousand individuals throughout the Indian River, Martin, Okeechobee, Palm Beach and St. Lucie counties. “We serve people with autism spectrum disorder, their families, the professionals serving them, employers and the community,” says Mercedes Pagano, Coordinator, Information, Publication & Marketing at CARD. “Our goal is to help individuals and families get the help they need so that they can optimize their potential and live the best lives possible.”

According to Pagano, the demand for services is growing. In 2011 the organization served just over two thousand individuals, by 2018 the demand more than doubled.  “We know that Autism is on the rise,” says Pagano. “One in fifty-nine children will receive an autism diagnosis, so outreach to all stakeholders is really important.  We promote CARD programs through various platforms, including social media.  Danny was assigned to me because he had solid computer skills and an interest in social media, web development and marketing; he also wanted to learn graphic design and develop his skills in photo shop, so he was a good fit.”

“Danny’s main role was to help with social media postings – Facebook, Instagram, Linked-in and Twitter. He created and posted different events, including major fundraisers; he supported special events and posted on different websites. His work lightened my load. We really enjoyed having Danny here; he was a great asset, so we tried to figure out a way to keep him on. We ended up hiring Danny through fundraising dollars.”

“The folks at CARD said there would be absolutely be no chance of a paid position after the OJT, and they could only offer the opportunity to gain skills,  so on the day they told us he was going to be hired, there was a gasp in the room,” says Shashoua. “The fact that fundraising was done to hire Danny, speaks to his talents and his value. He’s now a permanent employee working 8-10 hours a week; its perfect for him.”

“It’s great to see Danny growing on the job,” says Pagano. “He’s enthusiastic in all that he does, and he always reaches out to staff to see how he can help; he’s a real team player.” 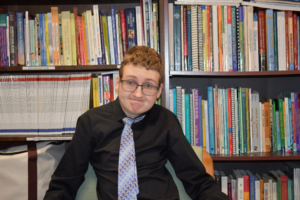 “Since I got this job, it gives me a reason to get up in the morning,” says Danny Goldstein. “My message to employers about hiring people with barriers…give them a chance at employment. We can do the work as good as people with no barriers.”